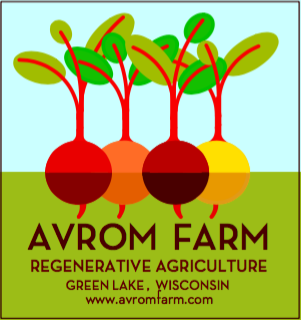 Avrom Farm is an integrated vegetable and pasture-based livestock farm in Green Lake, Wisconsin. We manage our farm as an ecosystem by integrating livestock, grain, pasture, and vegetables to create an agricultural model that is both resilient and productive.  By farming in this way we are able to produce exceptionally flavorful and nutritionally dense food.

We raise several breeds of heritage and endangered hogs including Berkshire, Red Wattle and Tamworth to resemble the old-world characteristics of hardiness, marbling and slow growth. These qualities make for deeper, richer flavors with excellent marbling.

To revitalize the health of our soils and to ensure the health and happiness of our animals we practice high density mob-grazing techniques to raise our hogs. This practice mimics the predator-prey relationship in wild ecosystems by keeping the animals relatively close together (in the wild to protect themselves from predation), but moving them frequently. This increases pasture diversity, water retention, and promotes healthy and resilient animals. This practice is typically done with cattle and other ruminants, but we're trying it out with pigs. During the winter months we replace what they get from the pasture with haylage - hay that is baled at high moisture and left to ferment so that all the enzymes and nutrients produced from the lush grasses and legumes are captured.

Pigs really are what they eat. Common sense right? If a pig's diet contains lots of trans fats, saturated fats, and simple sugars, common in conventional diets, the resulting pork will be quite unhealthy and lacking in flavor. For this reason we are really careful about what we feed them. We choose not to feed our pigs corn or soy because there are better options out there. We replace corn with barley because it results in firmer and more flavorful fat. We replace soybean meal with flax meal because it is loaded with omega-3s and high quality fiber. A well fed pig makes for pork that is healthy to eat.

There are billions of pounds of suitable pig feed ending up in landfills across the United States every year. In the landfill it decomposes and emits methane, which has 56 times the atmospheric warming power of carbon dioxide. We are committed to reducing the amount of grain we feed to our pigs and focus more on utilizing byproducts such as over ripened vegetables, spent brewers grain, whey, and our own spent mushroom media to feed our pigs. In addition to the many positive environmental implications of reducing our grain consumption and increasing the amount of leftovers we feed the pigs, the diversity of this diet produces pork that is far tastier and more nutritious to eat.

We raise slow-growing, pasture-raised chicken. There are many terms and buzzwords that get thrown around the supermarket in attempt to appeal to the demographic of food-eaters that value healthy, local and nourishing food. After a certain point, it is hard to distinguish what these terms mean when they are used liberally by the industrial food industry. When we talk about "pasture-raised" chickens we are referring to continuous flock movement, mimicking how birds in the wild interact with their environment. By moving the chickens to new pasture every day and encouraging them to forage amongst the diverse polyculture of plants and insects, the result is a fundamentally different chicken. This chicken is firm and savory with deep, rich flavor produced by the culmination of a diverse diet and healthy lifestyle.

Chickens are omnivores and because ours live outdoors on fresh pasture, much of their diet comes from living plants as well as insects with the occasional field mouse or shrew. Animal protein is a really important component to a healthy chicken’s diet. Without it chickens can develop a deficiency in the amino acid methionine and as a result start to peck each other. Most large poultry farms, certified organic included, debeak the birds to prevent pecking. This practice is inhumane and completely preventable. In addition to what our chickens harvest on their own from the pasture, we feed a balanced ration of barley, corn, oats, and linseed meal to promote high omega-3s.

Choosing chicken breeds that are slow-growing is an important part of producing chicken with extraordinary flavor. A chicken that has taken longer to grow will have more complex proteins, antioxidants, and vitamins than the 5 week old turbo-charged chickens common throughout nearly every grocery store in the United States. The slow-growing breed we have chosen is called the Freedom Ranger. They were initially bred out of protest of the fast-growing, industrialized breed of chicken, the Cornish Cross. They come from Northern France as part of the  Label Rouge movement, which is similar to the USDA Organic Standards, but has much more stringent regulations on animal welfare with a focus on small, diversified farms. In addition to their superior flavor, Freedom Rangers are equipped to thrive in the outdoors and transform grasses, bugs, and grain into highly nutritious food.

We focus on growing heirloom and uncommon varieties of vegetables. Although a perfect looking tomato might feel safe and familiar, just wait until you try an ugly heirloom tomato! So much of the diversity on vegetable farms has been boiled down to just a handful of varieties that have been manipulated for the longest shelf life, ease of processing, and highest yield. Flavor and nutrition simply don't play a role in the equation from the standpoint of grocery stores and many restaurants.